Shopping Cart
Your Cart is Empty
Quantity:
Subtotal
Taxes
Shipping
Total
There was an error with PayPalClick here to try again

Thank you for your business!You should be receiving an order confirmation from Paypal shortly.Exit Shopping Cart

Falls are an ominous yet very real part of life for people over 65 and many falls can be prevented once the causes are determined. Over 400 risk factors leading to falling have been identified including lack of physical activity resulting in loss of muscle tone, decreased bone mass, poor balance, and reduced flexibility; impaired vision, medications, disease including Parkinson’s, dementia, stroke and arthritis, surgery, and environmental hazards. 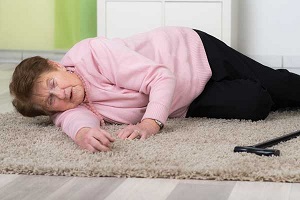 The risk of falls and associated complications rise steadily with age and can be a marker of increasing frailty. Frailty is not clearly defined but is widely accepted to include a combination of weight loss, fatigue, reduced grip strength, diminished physical activity or slowed gait associated with increased risk of falls, hospitalisation, loss of mobility and independence, increasing disability and death.(2)

A newly published trial has shown that 12 weeks of chiropractic care in a group of older patients resulted in improvements in their sensory and motor functions that are important for falls risk, as well as improvement in the physical component of quality of life. The study was conducted in New Zealand by researchers from the Centre for Chiropractic Research at the New Zealand College of Chiropractic, the University of Auckland, and the University Of Ontario Institute Of Technology. The study was the main trial in chiropractic researcher Dr. Kelly Holt’s PhD. While Dr Holt has stated, “it is undeniable that this piece of research makes an important contribution to our understanding surrounding an important public health issue.” (3)

The study showed that compared with the control group:

• Those receiving chiropractic care “improved significantly in ankle joint position sense error.” This shows a potential impact of chiropractic care on proprioception, or the brain’s ability to know where the body is in space.

• There was also a significant improvement of increased sensorimotor function at 12-weeks. Interestingly they only started to improve after 4 weeks of care, but not before.

• At the 12-week mark, the chiropractic group also improved by 13.5% in multisensory processing (integrating information from two or more senses), an important factor in falls risk.

This Randomized Controlled Trial shows that chiropractic can help improve function in older people, with a possible impact on their overall health and quality of life. We should encourage older adults to get checked!

Oops, you forgot something.

The words you entered did not match the given text. Please try again.

Reply prescriptions for propecia in nj
12:36 AM on September 1, 2021
Come Acquistare Cialis

Reply Braitty
9:48 AM on September 7, 2021
stromectol over the counter